Stone Parade are excited to be celebrating our 20 year anniverasary with a FREE Show at The Narrabeen Sands Hotel on Friday 1st December.

Please also keep an eye out for our 20 day count down where we will be releasing plenty of previously unseen behind the scenes pics from over the years.

We will be joined on the night by our good friend Tim Conlon. Fresh from killing it on The Voice, Tim is sure to blow the crowd away with his amazing new tracks.

Please join us for what should be a fantastic night of Rock N Roll! Great new video and Headline show at The Rock Lily!!

It has been a great past few months for the boys in Stone Parade. Besides sharing the stage with some very fine bands, the boys have been busy getting ready for a cracking headline city show and also have a great new video online now. So check out the video and come see the band in December!

‘Be Someone’ Interview with Stone Parade (NEW video)

December 2 headline show at the Rocklily

It’s been a long time between drinks but we want you to come celebrate the OFFICIAL LAUNCH of our new single ‘BE SOMEONE’ with us at Rock Lily (The Star) on Wednesday 2nd October. Recently we’ve had fun sharing the stage with Thirsty Merc and US band Lifehouse and now it’s our turn to headline this very special night.  Joining us on stage will be Sydney band ‘Nova and the Experience’.  A great excuse for some pre Christmas drinks and hearing some of our new tunes!

So put December 2 in your diary for a rockin show at The Rock Lily at The Star in the city. Doors open 7.30pm for a 8pm start. FREE ENTRY!!
Click here for more information Stone Parade are stoked to announce that we will be supporting powerhouse US band Lifehouse on Friday 16th October at Luna Park Big Top in Sydney!

We have a batch of tickets at the special price of $60 which are available from our website below. Customers name plus number of guests (tickets) will be added to the door list.

We will be performing new songs from our upcoming release and some past favourites! Come join us for a night of fun and music! New single ‘Be Someone’ Out now!

After a two year hiatus, we’re excited to be back doing what we do best. Our brand new single ‘Be Someone’ is officially released today on iTunes. It’s been a while but we are back!

“Be Someone’ has been a personal anthem for each of us in Stone Parade. It has helped us navigate through some of the toughest times and darkest moments we’ve been through individually and collectively.” Mark

“It’s a song that is constantly surprising with moments of sheer thrill mixed with moments where I find myself realising this is without doubt the most powerful song we’ve written.” Greg

‘Be Someone’ has been picked up as Single of the Day on the Music Network!

STONE PARADE –  BE SOMEONE (IND)

Lay down your rose-tinted nostalgia, Stone Parade are back with a new single and the promise of an EP in the new year. Following a two-year hiatus, the Sydney band are as brazen and complex as ever; Be Someone is a slow-burning anthem, one which bassist Mark Fouche said even helped the band navigate through dark moments. Sprawling guitars, a sturdy bass line and disarming verses – Be Someone has all the makings to eclipse Stone Parade’s debut hit single My Generation.

It also has made it’s debut in the Australian Weekly Top 20 Downloads and was the ONLY Independent release in the top 20!

Pre-order our new single ‘Be Someone’

We are pumped to announce our new single ‘Be Someone’ will be available for pre-order on iTunes from 11th September and will be dropping officially on 25th September!

It’s been a while but we are back! 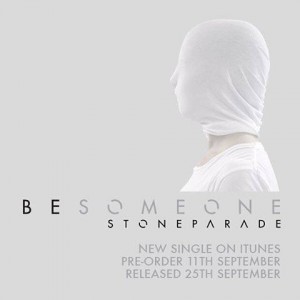 “Since the day it was written, ‘Be Someone’ has been a personal anthem for each of us in Stone Parade. It has helped us navigate through some of the toughest times and darkest moments we’ve been through individually and collectively.” Mark

“It’s a song that is constantly surprising with moments of sheer thrill mixed with moments where I find myself realising this is without doubt the most powerful song we’ve written.” Greg

Join Stone Parade for their first gig in 2015 at Lizotte’s Sydney, in Dee Why on Friday 27th March.

It’s been a while between drinks, so come along to hear some new tunes and some old favs! The boys have spent much of 2014 in the studio recording their upcoming album. No doubt they will be bursting at the seems to rock out at Lizottes.

Stoners Rock Out At Stone Fest

In possibly the biggest news we could possibly deliver, Stone Parade will be rockin Stone Fest! And …well… Van Halen, Billy Joel, Jimmy Barnes, The Living End and a few other bands will be there too:)

After a record sold out performace, Stone Parade return to Lizottes for another night of intimate raw acoustic performance that will leave you wanting more!  The boys will be again joined by good friends Is It Her? and Shed Musak. Be sure to book early and reserve your table otherwise you may miss ot on this not to be missed night.

“Stone Parade returned to a record selling crowd here at Lizotte’s in Dee Why and had the joint jumping !!!! Great energy packed show and a collection of multi talented musos.  Cheers chaps can’t wait to have you back !!!!”
Brian Lizotte

END_OF_DOCUMENT_TOKEN_TO_BE_REPLACED Stone Parade were announced winners last night in the Rock Category at the 2012 MusicOz Awards.  END_OF_DOCUMENT_TOKEN_TO_BE_REPLACED

Congrats to the Stone Parade boys for taking out ‘Best Rock Group’ at the 2012 MusicOz Awards held last night at the Sydney Opera House.

We’re polishing up our guitars, Billy’s bought himself a new shirt, Greg has stocked up on hair styling products and we’re fine tuning our performance in preparation for our appearance at the upcoming 2012 MusicOz Awards on Tuesday 15th May. END_OF_DOCUMENT_TOKEN_TO_BE_REPLACED

Stone Parade will be headlining a great night of Acoustic Rock at Lizotte’s in Dee Why with our good friends Is It Her and Shed Muzak. It should be a fun night of good food and good tunes. END_OF_DOCUMENT_TOKEN_TO_BE_REPLACED

Enjoy a meal and wine in an intimate setting and watch Stone Parade strip back their set to perform acoustically @ Lizottes, Dee Why on Thursday May 5th. END_OF_DOCUMENT_TOKEN_TO_BE_REPLACED Feeling the love in Toronto!

Goodbye New York, hello Toronto. We were greeted by freezing conditions and snow. We couldn’t believe it when Billy said he’d never seen snow before. You half can’t tell we are Australian’s walking the streets though, as every second snow pile up was the trench for another snow ball fight. Greg and alex were the obvious targets as Billy was sending down some thunderbolts of ice. END_OF_DOCUMENT_TOKEN_TO_BE_REPLACED This city takes your breathe away. This is truly once of the most amazing places on earth. There is a energy in this place that only cities like London can compare to, but I still feel this city takes the cake. We landed late on the Friday night and checked into our backpackers accommodation. I will never forget the first time i stepped into times square. It feels strange, like you have almost stepped onto a movie set. Think the travel took it out of us as we retired hurt for the evening. END_OF_DOCUMENT_TOKEN_TO_BE_REPLACED

Stone Parade are counting down the days until their performance at the Canadian Music Festival. They will be sharing the stage alongside other Australian bands; Birds of Tokyo, Hungry Kids of Hungary and Hilltop Hoods.

END_OF_DOCUMENT_TOKEN_TO_BE_REPLACED

Mixing it with the Maple Leaves

Our good friends, The Trews (lovely as pie Canadians) are returning to our shores once again and we are excited to announce that we will be doing some Sydney shows on their February tour.

END_OF_DOCUMENT_TOKEN_TO_BE_REPLACED Gearing up for some shows

Tuesday night in many parts of the globe is known as ‘tight ass Tuesday’s’ however not it stone parade land. We don’t get to hitup the cinemas for 1992 price tickets, instead we try hitting our straps working on our set.